What is the ordinary camera function on Fine Camera?

Zoom
A zoom slider can be hidden easily on Fine Camera.
If the double-tap of the zoom slider is carried out, it can be set as an initial value.

Moreover, if you tap two positions of the screen with two fingers, a light-blue square for focus and a rotating orange circle for exposure appear, and they adjust and lock in the center position respectively.
If it is less than four seconds, the orange circle and the light-blue square can be moved with your finger and a focus and exposure can be changed again.
For example, if you take a photo of a dog who has black eyes and black hair as it is, sometimes the boundary line of black eyes are not clearly shown.
In such a case, if you move the orange circle to a black hair, you’ll be able to take a photo with clear boundary between eyes and hair. 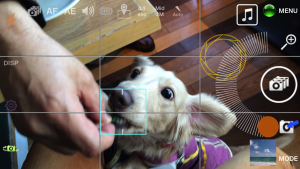 If you want to unlock the focus and exposure, move the direction of the camera or long tap on the screen with one finger.

In addition, a level meter with yellow circle and two kinds of grids can be used.
The level meter will change its color from yellow to green, if the level is detected. 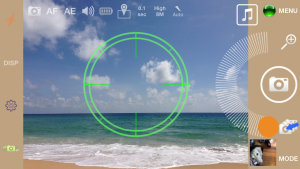