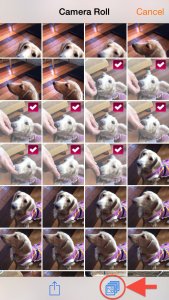 If you use iPhoto on Mac, you can watch a flip photo made from Fine Camera easily as follows.

In addition, because a flip photo is automatically changed into a still picture in Facebook, Instagram, Flickr, and LinkedIn, unfortunately you can’t enjoy the animation in those SNSs.