What can be performed with effects?

There are two type of photo effects on Fine Camera.
One is static effect such as “Sepia” and “Monochrome”, the other is dynamic effect such as “Wave”.
If a “ripple” is chosen on a Menu screen and a camera screen is traced by fingers, waves appear on a screen and those waves will disappear gradually. 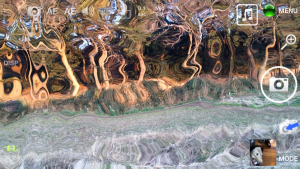 As for “sepia” and “monochrome”, regardless whether “Wave” effect is active or inactive, a screen becomes sepia or becomes monochrome.
If a photo is taken in the state, the photo is saved as it is.
Because, a photo saved becomes the low image quality of 1036×640 due to the various reasons, please use after understanding that.